On the 23rd of May, 2015, the street food scene in Berlin found a new playground. Organized by the Contemporary Food Lab, “Spargel International” was an international street food festival featuring asparagus. The festival drew chefs from around the world with one mission: combine Germany’s favorite vegetable with a bit of magic from their own culinary culture to cook up something delicious.

The idea was so popular (no fewer than 17,000 people wanted to attend, according to Facebook!) that the first attempt was shut down by the police. It’s a fact: what Germans have for asparagus is no less than true love. 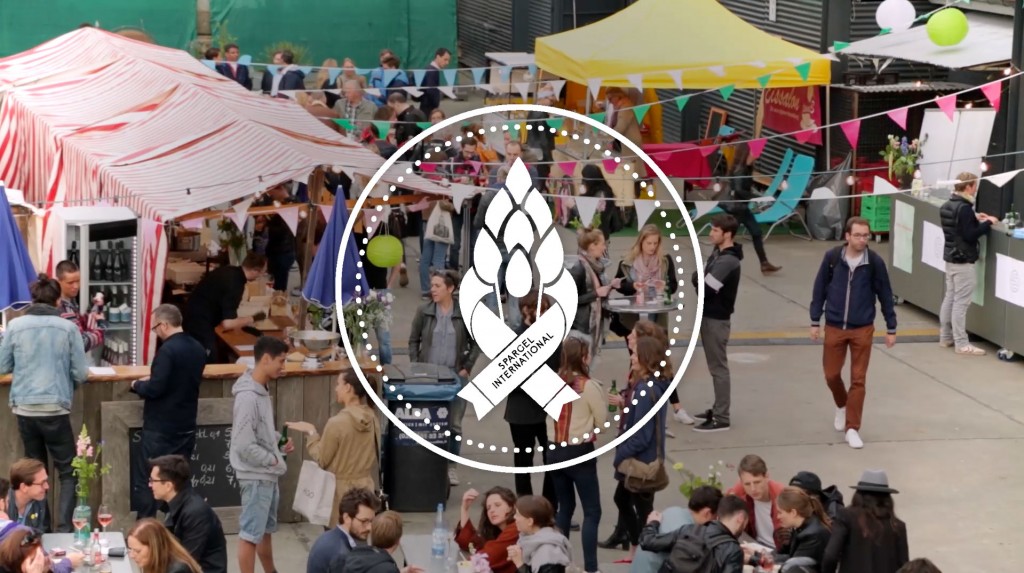 Asparagus cream soup. Asparagus with hollandaise sauce. With Black Forest ham, schnitzel, smoked salmon… or just brown butter. Every year in Germany, it’s the same story. From the moment spring arrives, every restaurant eagerly transforms their offerings into an “asparagus only menu”.

Asparagus is the number one vegetable in Germany. 90,000 tons are eaten every year between April and June, that’s 1 kg per person. There are three museums dedicated to the bud, and traditions are numerous. To open the season, a pyramid of 500 kg of asparagus is erected under the Brandenburger Tor in Berlin, and a Queen of Asparagus elected. Both parades among a bunch of traditional costumed people. All over the country people take part in Spargelfest, involving peeling competitions and generous amounts of local beers and wine. Where France and California have their wine tours, Germany has an asparagus route. But beware, we are talking here only of the white asparagus! A german expression even says “red like a strawberry, white like an asparagus” (spargelweiss, erdbeerrot). Buried in the ground to avoid the production of chlorophyll, the legend says that the best ones are harvested by moonlight.  and their popularity isn’t new.

In the tomb of Pharaohs

Native of Middle East, asparagus was used to decorate young married couples during ancient times. Egyptians put them in the pharaohs tombs, Greeks praised their medicinal properties, Arab women fed them to their husbands to ignite their libidos. When Plato celebrated it’s exquisite taste, Roman Emperor Augustus enjoyed them with honey. But at the end of the 5th century, when the Roman Empire crashed, the consumption of asparagus in Europe stopped. Considered as poorly nutritive and not calorical enough, asparagus had to wait until the 15th century to be back in the garden of German princes, and the beginning of the 20th century to really begin to spread throughout the population. The communist era brought another dark time for it: in east-Germany and east-Berlin, the vegetable was considered bourgeois, not nutritive enough, and hard to harvest, rusting in it being officially rejected. Some people would still break the rules and secretly grow asparagus at home to use as an in-demand exchange good.

How would you cook asparagus ?

Nowadays, nothing seems to stop the success of German asparagus. However, it has been always limited to the same traditional dishes every year, so with “Spargel International”, CFL decided to cross culinary borders. This year, the population of Berlin had the opportunity to discover seven ways to cook, season and marry asparagus with ingredients from other cultures. From a syrian baked Kibbeh and Fattoush that mixes asparagus with bulgur, lamb or pomegranate; to a Peruvian Causa con Esparragos marrying raw asparagus with limes, coriander and berries; or even a texan Asparagus Hotdog, with asparagus mustard and dill-pickled asparagus…

We all have different memories of asparagus dish, what is yours? How do you cook asparagus in your own city?

For more information about the other great projects from Contemporary Food Lab, check out their website here http://contemporaryfoodlab.com/

A Taste of Istanbul