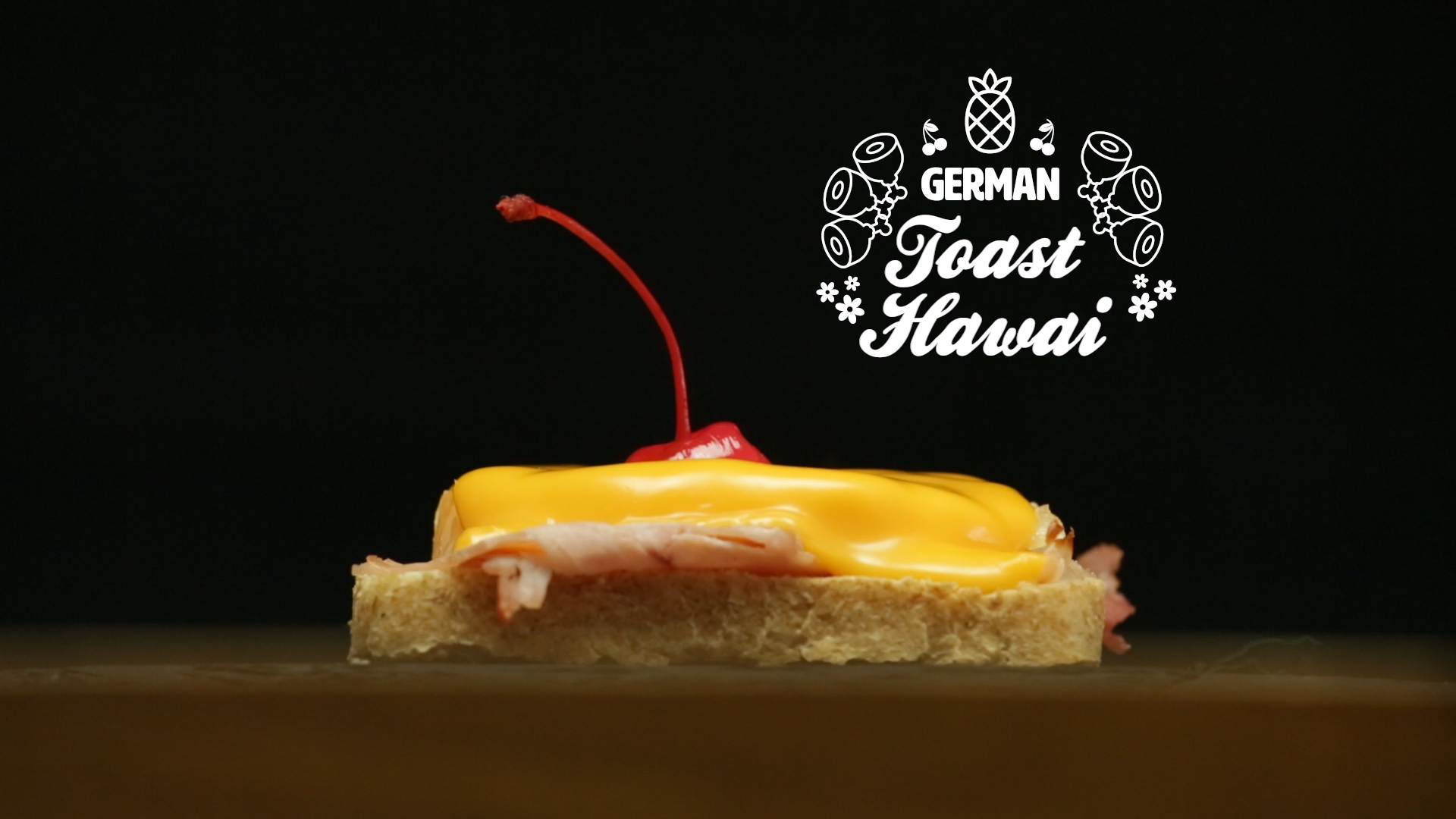 Toast Hawaii representing Germany? Well, there might be more famous German sandwiches, like Leberkässemmel or Butterbrot, but for us, being German, Toast Hawaii calls up strong childhood memories, so we had to go for it!

Masterchef on TV
Germany’s first TV cook Clemens Wilmenrod (who might have even stolen the recipe from his competitor Hans Karl Adam) presented the combination of the exotic and (back then) desirable tinned pineapple on white, industrially produced bread in his show 1955. The economy was booming, and the extravagant combination of ham AND cheese said: look at us, we’re prosperous, we can afford this! Traditional stew and dumplings were out, Toast Hawaii was in.

We love America
The dish shows how much the young Federal Republic of Germany wanted to link itself to the West in the time of the Cold War. For the divided country Toast Hawaii was a way to praise the American occupying power. In no time the dish made it onto the menus of the majority of pubs and Wirtshäuser in Western Germany, and also found a place on the dinner tables of many families.
It was one of the food highlights of my childhood, and I can recall watching the cheese bubble up in the oven, crouching next to it in my mother’s kitchen. As popular as it was in Germany, it never gained fame elsewhere in the world.

Tinned ananas will always be linked to Hawaii
A renaissance seems unlikely, given that it features ingredients which are today known for being not only low in nutritive value, but also “unhealthy”. However, as many Germans still keep sweet memories of it, there is a chance it will survive these times of veganism and gluten intolerance. Especially in more rural areas in West Germany, the Toast Hawaii’s influence is still omnipresent and its spin-offs —Schnitzel Hawaii and Pizza Hawaii — can be found in almost every local chip shop and pizza restaurant.

How to Prepare a Toast Hawaii

Preheat oven to 180-200 degrees Celsius.
Toast the bread and spread some butter on it

Build the toast: the slice of ham goes first, then the pineapple, and the cheese on top
Optional: sprinkle on some paprika powder

Bake the toast in the oven for 6-8 minutes, or until the cheese bubbles up.
Decorate the hole in the middle with the cocktail cherry

I’ve heard of variations involving tuna (from a tin!), mayonnaise, remoulade, ketchup and/or bacon. But as for some people the thought of pineapple and ham (especially on pizza) is already a no go, I won’t elaborate on that.

General remarks : The original recipe used Gouda cheese, which was later substituted with processed cheese (“Schmelzkäse,” “Scheiblettenkäse”). The cocktail cherry was not part of the first version presented on TV, but became popular through a TV commercial for Gouda cheese three years later.

Even for us it was difficult to find the right bread. As the XXL sandwich toast was too big to fit the cheese, we ended up using whole wheat toast from the organic supermarket next door. Sorry, Clemens!